The Knights played four games in their fifth week. East Ridge got the better of cross-town rival South Lake and secured a win in the MLK Classic at Ocala Forest High School against Lake Weir. Unfortunately, the Knights dropped two very close and competitive games against Ridge Community High School and Lake Minneola High School.  See below for full game recaps, statistics, and photos from the week five.

The Knights struck quickly against the Bolts to start the game.  Senior Gavin Schepman and junior Julian Cheese scored all 11 of the Knights’ unanswered points in the first quarter.  Additionally, the Knights played solid defense, as the Bolt failed to score in the first seven minutes of the quarter.  East Ridge established themselves a good lead at the end of the first quarter, 11-2.  The Bolts picked up their offense in the second quarter by rattling off five consecutive points to begin the period.  However, Cheese would respond with 7 of his 17 total points in the second quarter.  The Knights were able to prevent the Bolt from scoring for two minutes toward end of the first half, but then made a costly turnover in the final seconds.  Ridge Community stole the ball, pushed the fall ahead, and made a sensational slam-dunk.  In spite of how the first half ended, the Knights were able to retain their lead, 23-14, going into halftime.

The Bolts came out hot in the beginning of the fourth quarter, as they began the period with a nine point run off three field goals and three foul shots.  With under six minutes to play in regulation, the Bolts took the lead, 25-27.  With under four minutes left to play, Cheese scored a basket and tied the game at 27, but the Bolts responded with a basket to retake the lead, 27-29. With a two-point lead, Ridge Community failed to make good on a couple of trips to the foul line, as they missed the front end of two single bonus foul shot attempts.  Cheese took the ball hard to the basket in the final minute of regulation, and was fouled.  He capitalized on one of the free throws, cutting the Bolts’ lead to one, 28-29.  Next, the Knights fouled, and Ridge Community capitalized on both foul shots, extending the lead to three, 28-31.  East Ridge failed to capitalize on their next possession, and in transition to play defense, committed another foul.  However, the Bolts failed to capitalize on both foul shots.  With less than four seconds to play in regulation, the Knights took three timeouts in order to prepare a long-court pass play for the final shot of the game.  A long-court pass made it to Julian Cheese at midcourt, and he pitched it ahead to senior Austin Grant who caught the ball at the three-point line, turned, and fired.  Grant’s three-point shot went in the basket as the horn sounded, tying the game at 31, and putting the game into overtime! 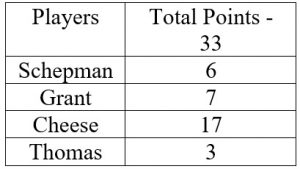 The Knights’ record fell to 5 wins and 9 losses with a loss to Ridge Community High School on Monday evening. The Knights were led by junior Julian Cheese with 17 points and 8 rebounds. Senior Treasure Bennett led the Knights in rebounds with 9 total. The Knights struggled from the three-point line (8%) and from the floor (23%).  The Knights capitalized on 6 of 9 free throws (67%).  East Ridge grabbed 37 total rebounds.  Unfortunately, the Knights failed to take care of the ball in the second half, making 10 of their 18 total turnovers in the second half of the game.

The East Ridge High School boys’ basketball team returned to action on Tuesday evening, as they hosted their cross-town rival, South Lake High School. The Knights had just come off a close, overtime loss to Ridge Community on Monday night, and hoped to enact revenge against the Eagles of South Lake.

The Knights caught fire in the first quarter, and were led by senior Austin Grant’s three-point prowess.  Grant made four three-pointers in the opening quarter, which proved too much for the Eagles to overcome, as the Knights secured their first quarter lead, 23-9.  The Eagles would muster nine more points in the second quarter, but could not quite match East Ridge.  In fact, Grant would make one more three-pointer in the final minute of the half, extending the Knights’ lead by 16, 34-18.

In the third quarter, the Eagles found it difficult to defend junior Julian Cheese.  Cheese scored 8 of the East Ridge’s 10 points in the third quarter off three field goals, including an alley-oop slam-dunk, and two foul shots.  The Knights furthered their lead 44-26 at the end of the third quarter. The fourth quarter was seemingly a foul shooting contest for the Knights, as South Lake played in foul trouble the entire period.  The Knights made 11 of 21 foul shots, 7 field goals, and 1 three-pointer, totaling 28 points in the fourth quarter.  The Eagles were only able to put up 13 points in the final quarter, as the Knights secured their sixth win of the season, 72-39. 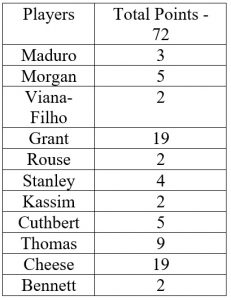 The Knights’ record improved to 6 wins and 9 losses with a win against South Lake High School on Tuesday evening. The Knights were led by junior Julian Cheese and senior Austin Grant who both scored 19 points each. Sophomore Roshaun Thomas also contributed 9 points. Senior Treasure Bennett led the Knights in rebounds with 10 total. Senior Gavin Schepman led the Knights in assists with 6 total assists. Senior Kyle Stanley led East Ridge in steals with 5 total steals. The Knights made 7 of 18 three-pointers (39%) and made 25 of 59 total field goals (42%).  East Ridge made 15 of 28 foul shots (54%).  The Knights out-rebounded the Eagles, 50 to 31.  Additionally, East Ridge made 14 total steals and 14 total assists, but also committed 18 turnovers.

The East Ridge High School boys’ basketball team traveled to play their cross-town rival, Lake Minneola High School on Friday evening. The Knights lost to the Hawks of Minneola in their contest earlier this season, and were hopeful to enact some revenge.

The Knights struggled offensively in the first quarter, as they only mustered 7 points off three field goals and one foul shot.  On the other hand, the Hawks comfortably rattled off 16 points off five field goals, one three-pointer, and three free throws in the opening quarter, as the Hawks secured their lead 7-16 at the end of the first.  The Knights picked up their offense in the second quarter, as they ran off six unanswered points off three field goals in the first minute of the second period, cutting the deficit to three.  The Hawks retaliated with  three made foul shots and a field goal, to extend their lead by eight.  Then, junior Julian Cheese drove the lane hard, and slam-dunked, which led to an eruption from the East Ridge fans.  Over the next three minutes, the Hawks and the Knights exchanged shots.  Cheese, once again, responded with a thunderous slam-dunk with two minutes left to play in the first half, and again, the East Ridge fans went ballistic!  The Knights were able to chip away at the Hawks’ lead, as they went into halftime down just four points, 24-28.

The Knights picked up their offense in the third quarter.  Junior Julian Cheese scored six of his fifteen points in the third quarter.  Cheese scored 9 of his 22 points in the third period.  The Knights continued to close the gap in the middle of the third period, and actually took the lead off a successful three-pointer by senior Austin Grant. Over the next three minutes, the Knights and the Hawks exchanged baskets, and Lake Minneola was able to regain their lead.  However, in the final minute of the third quarter, the Hawks were called for a personal foul and a technical foul.  Cheese capitalized on three of the four foul shots in that series, and in the final seconds of the quarter, junior Isaiah Morgan made a three-pointer from the corner, propelling the Knights’ lead to four points, 47-43.  The Knights opened the final quarter with five unanswered points off a field goal and three foul shots, extending their lead to nine points, 52-43.  However, the Hawks did not fold.  Over the next four minutes, the Hawks ran off 19 unanswered points! With under three minutes to play, the Knights had squandered their lead, and the Hawks were up ten, 52-62.  The deficit would too much for the Knights to overcome, as they ultimately fell to the Hawks, 56-68. 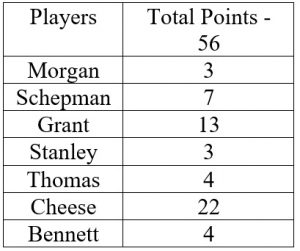 The Knights’ record fell to 6 wins and 10 losses with a loss to Lake Minneola High School on Friday evening. The Knights were led by junior Julian Cheese who scored 22 points and made 8 blocks. Senior Austin Grant also contributed 13 points. Seniors Treasure Bennett and Julian Cheese led the Knights in rebounds, grabbing 14 and 11 rebounds, respectively. Senior Austin Grant led East Ridge in steals with 5 total steals. The Knights went 2 for 6 from the three-point line, and only shot 17 for 58 (29%) from the field.  East Ridge shot 20 for 33 (61%) from the foul line.  Unfortunately, the Knights turned the ball over 30 times in the game, which proved to be costly in the final quarter of play.

The Knights’ record improved to 7 wins and 10 losses with a win against Lake Weir High School on Saturday afternoon at the MLK Classic at Ocala Forest High School. The Knights were led by junior Julian Cheese who scored 16 points. Seniors Austin Grant and Treasure Bennett also contributed 11 points each. 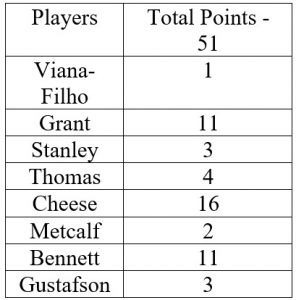