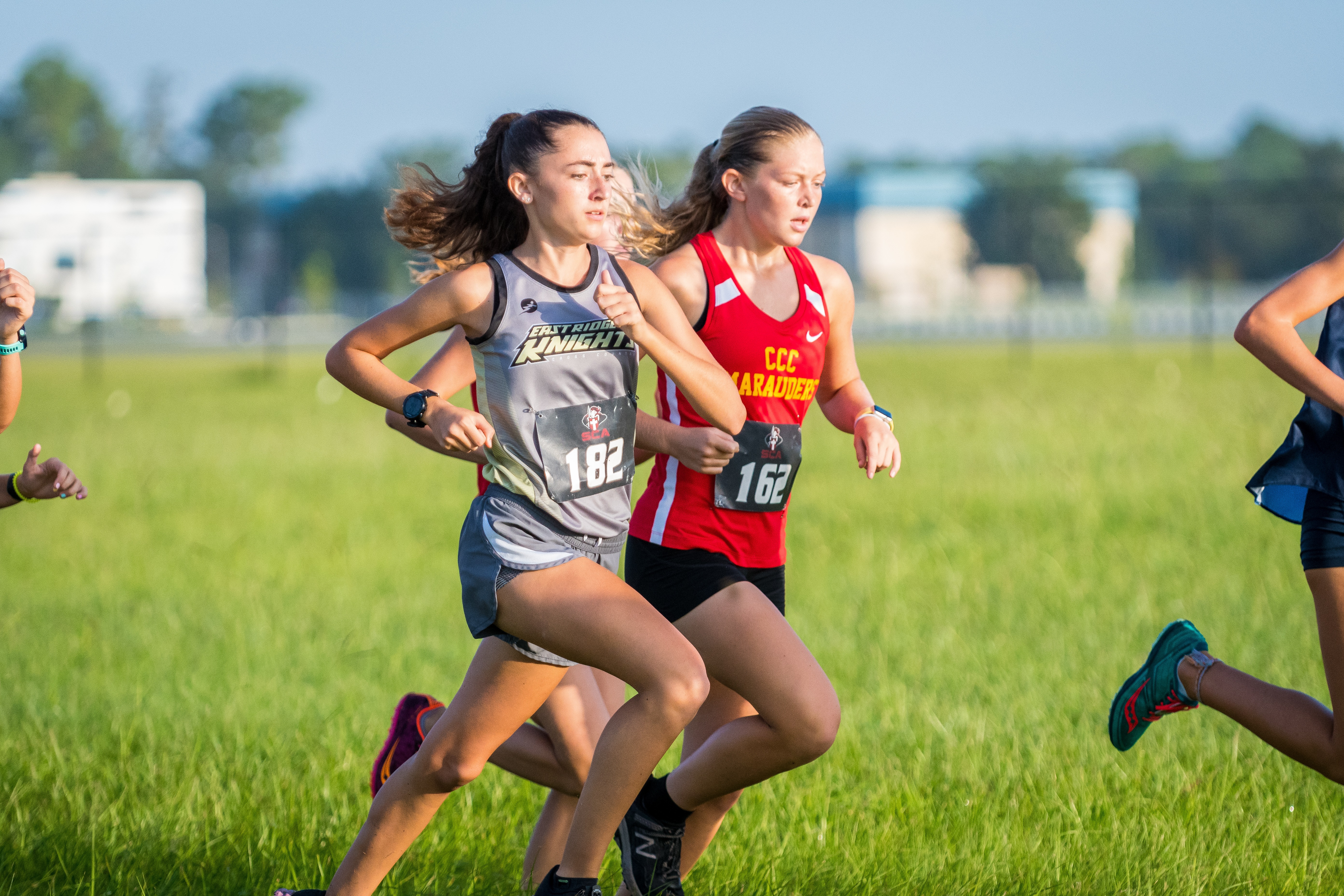 The East Ridge High School girls cross country team opened the 2020 season today, as they competed in the Seffner Christian Invitational at Sun n Fun Fly-In in Lakeland, Florida. It was a hot, sunny, and humid morning near the airfield of Lakeland Airport. This venue was chosen just a few days prior to the event, as the original site, Holloway Park, was deemed unsafe due to flooding that took place from last week’s thunderstorms. The tall grass, gravel, and relative lack of shade made it a lot more “sun” than “fun” at the Sun n Fun Fly-In, but the Knights charged on through the day’s heat and competition!

Girls from 15 different schools throughout Florida participated in this morning’s elite division of the Seffner Christian Invitational. The gun sounded at 8:10 AM sharp, and the girls were off and running. East Ridge’s first runner through the finish line was senior Mackenzie Hill. Mackenzie put up a time of 22:54 and placed 27th out of 87 total elite finishers. The second Knight through the finishing chute was senior Heidy Castillo. Heidy’s finish time was 25:09 and she finished in 48th place.

The third Knight to finish was sophomore Bre Peine. Bre finished in 58th place and posted a time of 26:20. The fourth finisher for East Ridge was senior Olivia Peine who finished in 71st place and in a time of 27:48. The fifth runner and final team scorer for the Knights was junior Keira Votava. Keira placed 73rd and posted a time of 28:04 in her debut as an East Ridge Knight. Sophomore Alanis Melgar and senior Caitlyn Cavender finished in the team’s sixth and seventh positions in the elite division.

As a team, the East Ridge girls placed eleventh out of eleven schools that fielded complete teams. IMG Academy, out of Bradenton, claimed first place at the meet by placing five of their runners in the top fifteen. The overall winner for the girls varsity race was sophomore Tatum David from IMG Academy. She finished the race in a swift time of 18:09.

Saturday’s elite division showcased some of the best varsity teams in the state of Florida. Beyond IMG Academy, numerous state competitors from last season’s state championships participated in the elite division. Cambridge Christian, who placed third at last season’s Class 1A State Championship, placed second in Saturday’s race. Holy Trinity, Out of Door Academy and Tampa Bay Heat also were 1A state championship competitors. Additionally, Lake Minneola High School and Sarasota High School competed in Saturday’s race, and they were state qualifying teams last season in Class 3A and Class 4A, respectively.

The girls cross country team will travel to St. Cloud on Saturday September 12th to participate in the St. Cloud Invitational at St. Cloud High School.

For full results from the Seffner Christian Invitational visit http://elitetiming.net/live-results/2020/20200905-sef/?fbclid=IwAR3Azi80YS5xKU89t8tZWv9RX_kILHzcCBIVAxm4YWXGRr0xoXywUKIE-Iw.