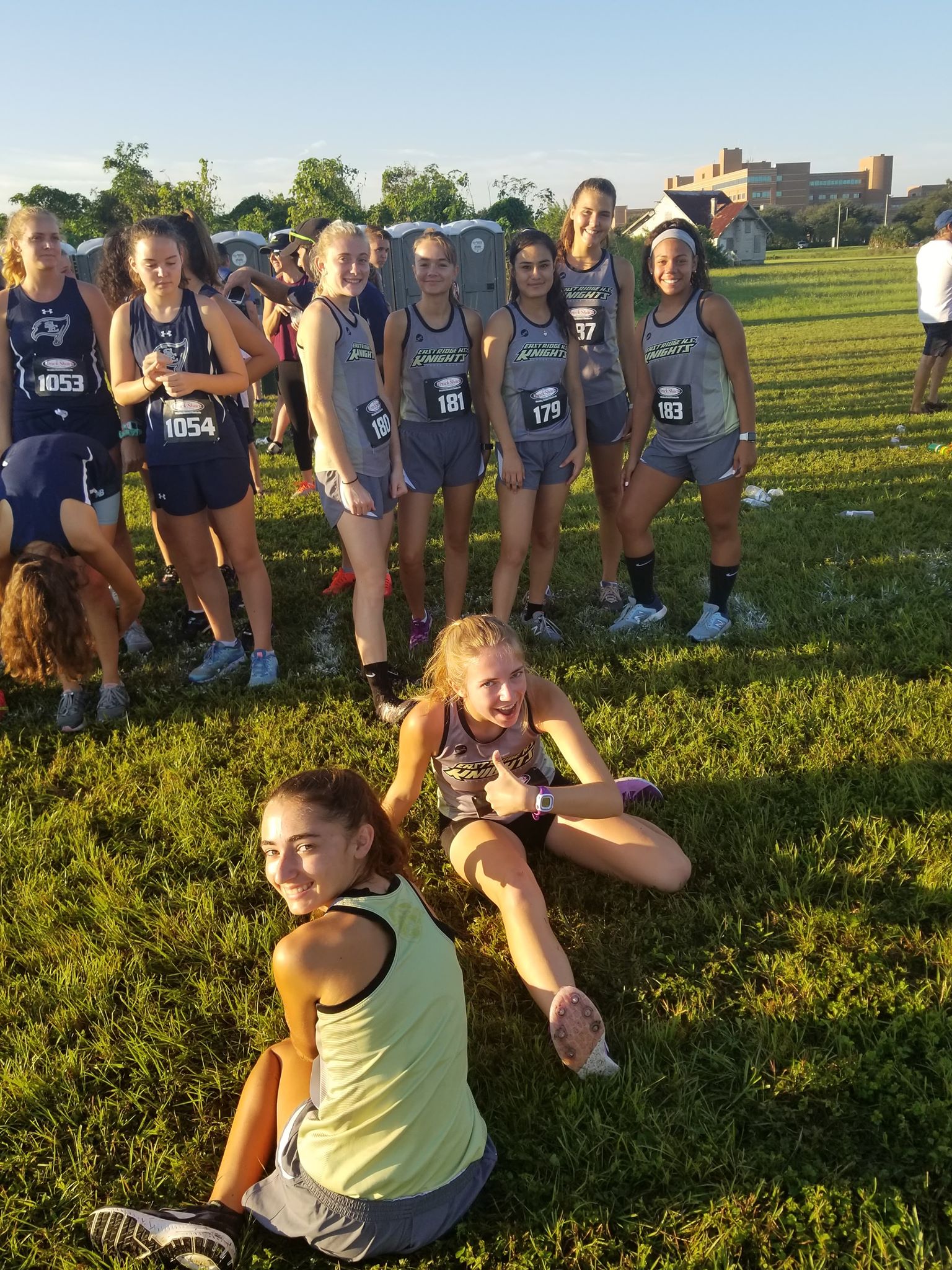 On Saturday morning the East Ridge High School girls cross country team traveled to the Space Coast to compete in the 47th annual Astronaut Invitational at the Chain of Lakes Park in Titusville, Florida. The wetlands of Chain of Lakes did not produce any issues with bees or yellow jackets, but if one looked out at the pond one would have seen some alligators with their heads slightly emerged from the pond. Upon arrival in Titusville, the temperature sat at a cool 70 degrees, but by the time of the awards assembly a few hours later, the temperature had climbed to 85 degrees. The morning teased the runners with a hint of fall temperatures, but quickly transitioned to late summer temperatures.

Girls from 38 different schools throughout Eastern and Central Florida participated in this morning’s meet. For a change, the boys varsity race was first, so the girls varsity race did not start until 8:00 AM. East Ridge’s first runner across the finish line was senior Reagan Parks. Reagan has run this course three out of her four years in high school. Her first run at Chain of Lakes was when she was a freshman, and she placed 243rd out of 286 female runners in a time of 29:08. Last year, Reagan finished in 21:40 and placed 33rd out of a field of 254 female runners. Reagan’s performance this morning blew away even last year’s performance, as she finished in a career personal best time of 20:09 and placed 8th out of a field of 293 female runners! Reagan’s new career personal best time leaves only two girls in East Ridge’s eighteen year history to have faster 5K times. Junior Mackenzie Hill came through the finish chute second for the Knights. Mackenzie improved by four seconds from her 2018 Astronaut Invitational finish time, as she finished in a time of 22:37. Mackenzie finished in 66th place this morning.

The third Knight to finish was junior Olivia Peine. Olivia finished in 97th place in a season personal best time of 23:29. Olivia’s performance was more than a minute faster than her performance at the Astronaut Invitational last season. Junior Mia Vogel-Lag was the fourth scorer for the varsity team this morning. The Norwegian exchange student placed 125th and came across the line in a time of 24:16 in her first race as an East Ridge Knight. The fifth runner for the Knights was freshman Alanis Melgar. Alanis placed 150th and posted yet another career personal best time of 25:00. Junior Caitlyn Cavender was the sixth runner for East Ridge this morning. Caitlyn placed 199th and finished in a season personal best time of 26:19. Junior Heidy Castillo was the seventh Knight to finish the race, and she placed 233rd overall in a time of 27:32.

The East Ridge Knights also had one participant in the girls junior varsity race this morning. Sophomore Mansi Patel finished in 93rd place in a field 189 junior varsity female runners. Mansi finished in a career personal best time of 30:21.

As a team, the East Ridge girls placed twelfth out of 38 schools that fielded complete teams. East Ridge was able to edge out district rivals Hagerty, Lake Howell, West Orange, and University (Orange City) high schools this morning. Additionally, the Knights were able to out-perform their cross-town rival Lake Minneola High School, who finished fifteenth overall. East Ridge was not quite able to keep the pace with Oviedo and Lake Mary, two other district rivals who placed fourth and fifth overall, respectively. Father Lopez took first overall in the team scores by placing three girls in the top ten. This year’s Astronaut Invitational overall winner for the girls varsity race was sophomore Amber Schulz from Timber Creek High School. Amber successfully defended her title, as she won the Invitational last year. This morning she finished the race in a speedy time of 18:59.

The girls cross country team will participate in the Early Hawk Invitational on Saturday September 14 at Lake Minneola High School.