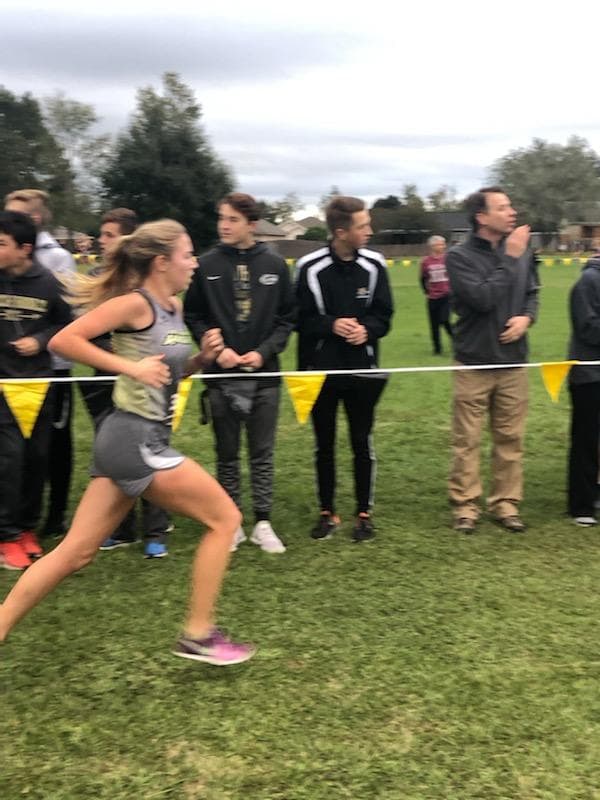 Girls from 19 different schools made up a large field of 137 total runners who all competed Saturday morning in the Class 4A Region 1 Championships. The girls race went off at 8:00 AM – just past the sunrise of a brisk north central Florida morning. The Knights earned their regional berth through their qualifying performance at last week’s Class 4A District 2 Championships at West Orange High School. Under a cloudy sky with damp conditions and the temperature locked at 59 degrees, the regional race began, and the Knights raced their second consecutive regional meet.

The first Knight through the finish chute was senior Reagan Parks. Reagan darted out of the starting box to secure a position among some of the elite runners in central and north Florida. She rounded the first mile marker in a time of 6:08, which had her spotted in fourteenth place. Reagan was determined to keep her positioning within, and as close to, the top fifteen as she could, as the top fifteen individuals advance to the state championships. As the race continued, Reagan dropped a few positions as she settled into the second mile. Parks was spotted in 23rd place at the second mile marker. Reagan, and a host of other state qualifying hopefuls, put on a courageous show of competition and desire, as they hustled through the third mile of the race. Reagan placed 26th overall and finished in a time of 20:09 in what was the third regional meet of her high school career, and the last cross country meet of her high school career. Reagan had the courage to test her running threshold by keeping in close proximity to the region’s best runners throughout the entire race. Although Reagan did not qualify for the state finals, she did have some outstanding performances as a senior and left her mark on East Ridge’s cross country program. She led her team in all ten of the meets she participated in this season. Additionally, she set a career personal best time of 19:56, and became only the third female in East Ridge High School’s history to break the 20:00 mark in a 5K. She also claimed her first individual championship by winning the Celtic Invitational in Ocala last month. Reagan’s performance at Santa Fe in the regional meet this season outshined her performance on the same course at the regional meet last season, as she improved her time by nearly one minute and improved her position by 23 places!

The seventh Knight to finish was junior Mia Vogel-Lag. Mia’s regional performance was hindered by some late season soreness in her foot, hip, and quadriceps. Despite the pain, Mia put out one last courageous performance for herself and her teammates. Mia, an international student from Norway, helped propel the team to success in several of the meets this season. Her best performance of the season came at the Hawks on the Hill Invitational where she finished in a time of 23:14.

East Ridge finished fifteenth out of nineteen complete teams. The eight female teams from Class 4A Region 1 that qualified for the state meet were Chiles, Mandarin, Creekside, Niceville, Oviedo, Buchholz, Fleming Island, and Spruce Creek. Chiles High School won the regional championship by placing four girls in the top twenty-two. Mandarin High School was the regional runner up, and clinched that spot by placing five girls in the top twenty-five. Senior Ashley Klingenberg of Lake Brantley High School was the individual regional champion, as she finished in a time of 18:20 to claim her regional crown. These teams and other qualifying individuals will compete at the FHSAA State Finals in Tallahassee on Saturday November 9.