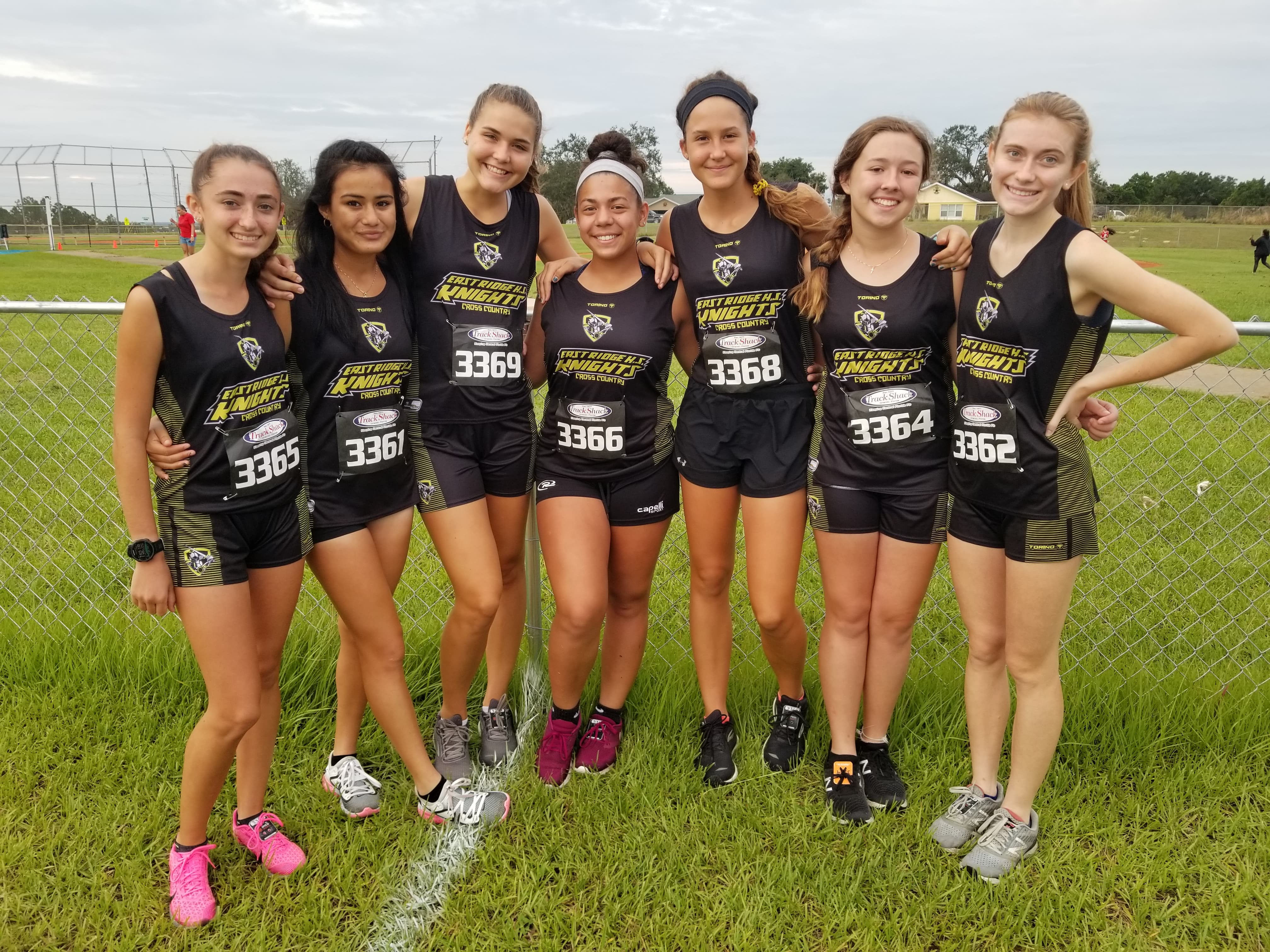 Girls from six different schools from predominantly Polk and Osceola counties participated in this morning’s meet at Ben Hill Griffin Elementary School in Frostproof. The girls varsity race began at 8:00 AM. The course was a single P-shaped loop, that began near the athletic fields of the elementary school, and then onto a clay road that took the runners along some rolling hills through some orange groves. The course ended back on campus with a finish in the baseball and softball complex. Senior Mackenzie Hill was the first Knight to reach the finish line. Initially Mackenzie settled in with three other top runners, but then after the first mile mark the lead pack began to separate. Ultimately, Mackenzie finished in a swift time of 20:57! Placing second overall out of a field of 30 varsity runners, Mackenzie medaled for the fourth week in a row! Her performance this morning was her second best time of the season. The second Knight through the finish chute was sophomore Bre Peine. Bre’s finish time was 23:24 and she finished in sixth place overall. Bre’s performance on Saturday morning earned her a new season best time.

The third Knight to finish was senior Heidy Castillo. Heidi finished in eighth place and posted a time of 23:31. Today’s performance was Heidy’s second best time of the season. The fourth finisher for East Ridge was sophomore Alanis Melgar. Alanis placed eleventh and posted a time of 24:53 – a new season best! The fifth finisher for the Knights was senior Olivia Peine, who returned to action this week after dealing with some mid-season injuries. Olivia placed sixteenth overall, and finished in a time of 26:13. Freshman Addison Dodd and senior Caitlyn Cavender rounded out the Knights varsity team, as they finished sixth and seventh for the team. Addison finished in a time of 29:15 and in 22nd place, while Caitlyn finished in 31:05 and in 24th place.

As a team, the East Ridge varsity girls placed second out of four schools that fielded complete teams. In fact, the final team scoring came down to a tie breaker between East Ridge High School and Frostproof High School, as both teams’ scores totaled to 38. In cross country, team scores equal the sum of a team’s first five runners’ finishing positions after unattached individual scoring adjustments are made by the timers and scoring managers. In the event of a tie between two teams, as in the case with Saturday’s meet, the tiebreaker is determined by the finishing positions of both teams’ sixth finishing runners. Frostproof’s sixth team finisher placed 17th overall, while East Ridge’s sixth team finisher placed 22nd overall. With that tiebreaker, Frostproof High School claimed first place at the meet and had placed four of their runners in the top fifteen positions. The overall winner for the girls varsity race was junior Cristal Gomez from Frostproof High School. She finished the race in a swift time of 20:21.

Being past the midway point of the season, rest and recovery are absolutely necessary to prepare runners for the final push to the district race. The Knights have two regular season cross country meets and one week off before the district race occurs. In fact, the FHSAA reconfigured the district assignments in an effort to reduce the number of teams competing in a single district. This reduced the original district of 17 teams down to three separate districts. East Ridge is now assigned to a Class 4A District 6 with five other schools. Those schools include West Orange High School, Windermere High School, Olympia High School, Ocoee High School, and Apopka High School. These changes also altered the regional meet qualifications, as now the top three scoring teams and the top four individual finishers from non-qualifying teams will advance to the regional meet. The district meet’s date and location were also altered, and the district meet will now be held at West Orange High School on Friday October 30th. The girls race will start at 8:00 AM.

The girls cross country team will travel to Wildwood High School on Saturday October 10th to participate in the Wildwood Invitational.

For full results from the Frostproof Invitational visit the following link: