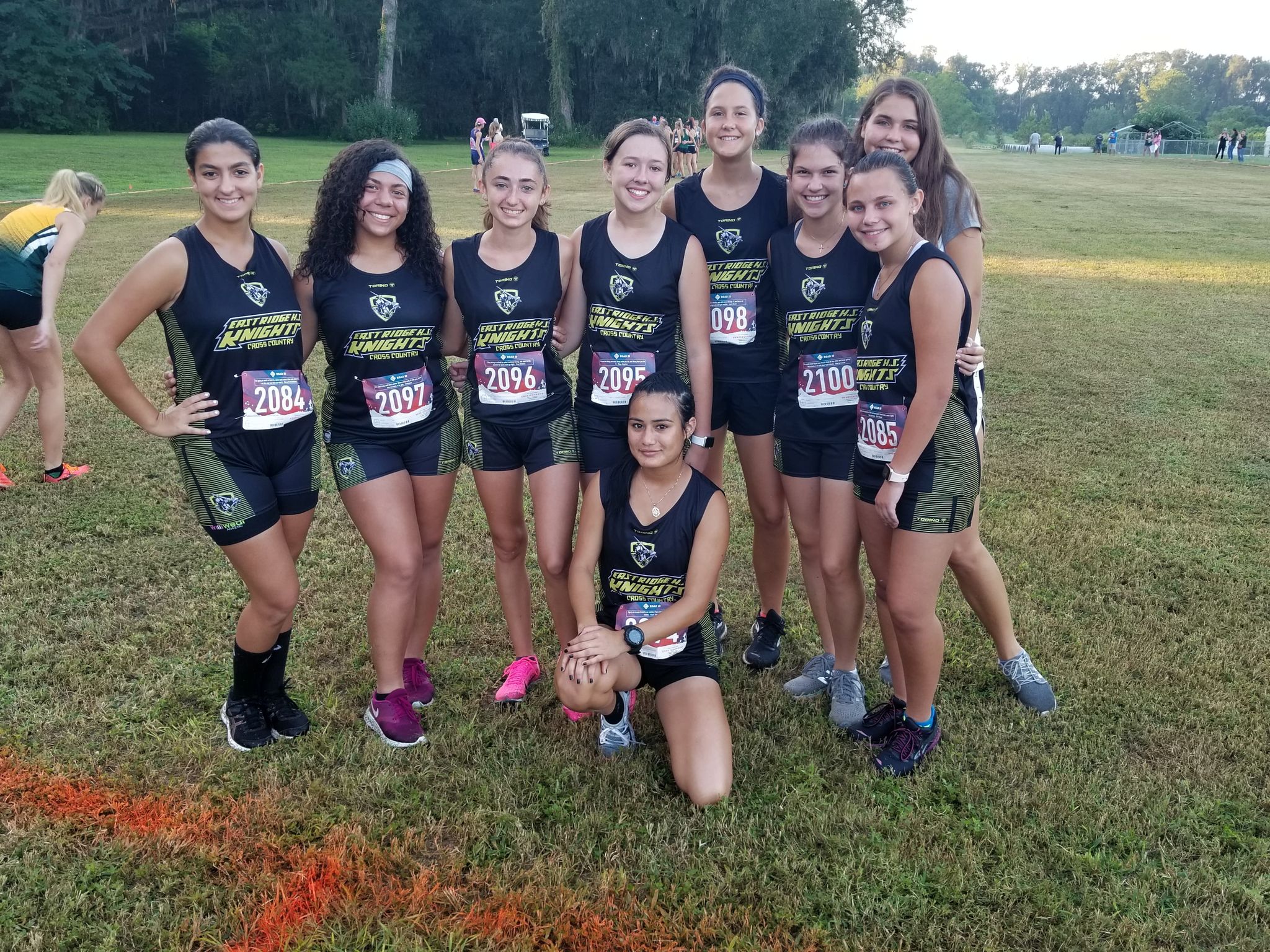 Girls from 14 different schools throughout central Florida participated in this morning’s meet at Trinity Catholic High School. The girls varsity race began at 8:00 AM. The course was a two loop course, that began on a practice football field, went through a small forested portion of the campus, and then around the academic buildings of the campus. The course ended with a short track finish in the stadium. Senior Mackenzie Hill was the first Knight to reach the finish line. Mackenzie rounded the first mile marker, spotted in third place, in a time of 6:24. In the second mile, her and Ocala Forest’s Journee Martin, separated themselves from the lead pack. Mackenzie maintained her position, and finished in a time of 21:04! Placing second overall out of a field of 65 varsity runners, Mackenzie medaled for the third week in a row! Her performance this morning was nearly a minute improvement from her performance at Trinity Catholic last season. The second Knight through the finish chute was senior Heidy Castillo. Heidy’s finish time was 23:00 and she finished in thirteenth place. Heidy’s performance on Saturday morning earned her yet another new career personal best time. For three consecutive weeks, Heidy has set career personal best times, and her performance at Trinity this morning was more than a minute and a half improvement from her performance at Trinity last season!

The third Knight to finish was sophomore Bre Peine. Bre finished in an impressive sixteenth place and posted a time of 23:29. Today’s performance was a season best for Bre, as she improved by a minute from her performance last week. The fourth finisher for East Ridge was sophomore Alanis Melgar. Alanis placed 31st and posted a time of 25:36 – a new season best. In a close track finish, junior Keira Votava followed her teammate in, and was the fifth finisher for the Knights this morning. Placing 32nd overall and finishing less than one second behind her teammate, Keira’s performance was a career personal best by nearly twenty seconds! Making her debut as a varsity runner, freshman Addison Dodd was the sixth finisher for the Knights. Setting a new career personal best for the fourth week in a row, Addison finished in 28:18 and in 49th place overall.

As a team, the East Ridge varsity girls placed third out of six schools that fielded complete teams. Although the Knights were not able to three-peat as a team at Trinity, individual performances were improved compared to earlier races this season. P.K. Yonge School, from Gainesville, claimed first place at the meet by placing four of their runners in the top fifteen. The overall winner for the girls varsity race was Journee Martin from Ocala Forest High School. She finished the race in a swift time of 20:30.

The Knights also had two runners participate in the girls junior varsity race on Saturday morning at Trinity Catholic. Sophomore Alexandra Dimitros finished in 31:58, a new personal best time! Sophomore Brenna Oliveri returned from injury today, and finished her third race of the season in a time of 37:49.

For full results from the Trinity Catholic Invitational visit the following links: