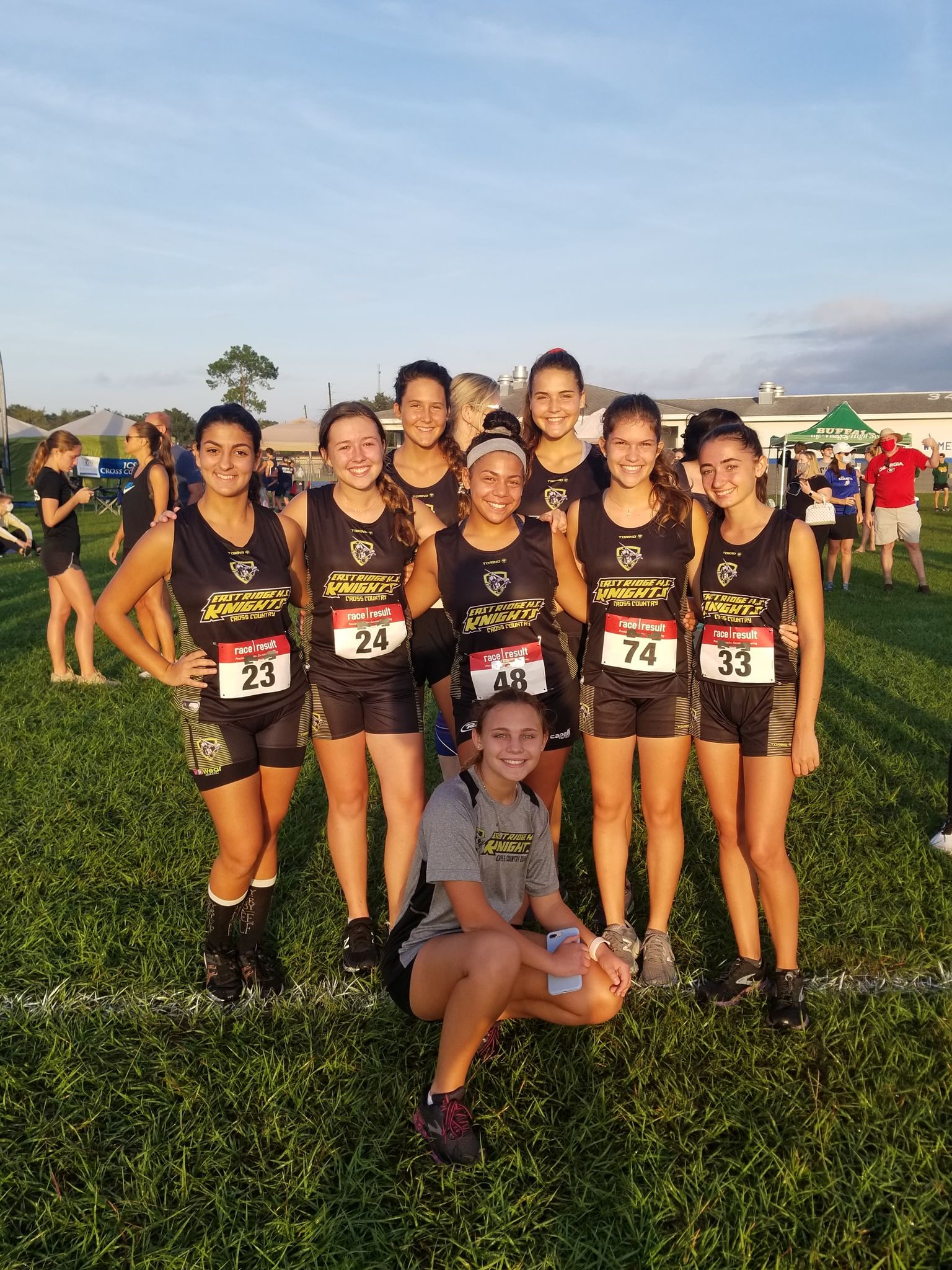 The East Ridge High School girls cross country team competed in the Wildwood Invitational at Wildwood High School on Saturday morning. For the second week in a row, the Knights were undermanned due to some ongoing injuries and illnesses. However, the runners pushed themselves to overcome the setbacks of their sidelined teammates. In fact, five runners set new season personal bests at Saturday’s meet!

Girls from twelve different schools from predominantly Lake and Sumter counties participated in Saturday morning’s meet at Wildwood High School. The girls varsity race began at 8:00 AM. The course included two loops around the athletic fields and buildings on Wildwood’s large campus. The course ended in the football stadium with a track finish. Senior Mackenzie Hill was the first Knight to reach the finish line. Mackenzie placed sixth overall, and finished in a time of 21:23. Placing sixth overall out of a field of 65 varsity runners, Mackenzie medaled for the fifth week in a row! The second Knight through the finish chute was sophomore Bre Peine. Bre’s finish time was 22:37 and she finished in tenth place overall. Bre’s performance on Saturday morning earned her a new season best time – a time that is less than thirty seconds off her career best time, which she set at the regional meet as a freshman in 2019. For two consecutive weeks, Bre has medaled in varsity races!

The third Knight to finish was junior Keira Votava. Keira finished in 23rd place and posted a time of 24:40. Today’s performance gave Keira a new career personal best time by nearly a minute! Keira was sidelined last week with some calf pain, but rested and recovered, and really helped her team succeed at Wildwood. The fourth finisher for East Ridge was sophomore Alanis Melgar. Alanis placed 25th and posted a time of 24:49 – another new season best for the second week in a row! The fifth finisher for the Knights was senior Olivia Peine. Olivia placed 35th overall, and finished in a time of 26:15. Freshman Addison Dodd and sophomore Alexandra Dimitros rounded out the Knights varsity team, as they finished sixth and seventh for the team. Addison finished in a time of 27:40 and in 41st place. Addison’s performance resulted in a new career personal best time by more than thirty seconds! Alexandra made her varsity debut by setting a new career personal best with a time of 30:07!

As a team, the East Ridge varsity girls placed third out of six schools that fielded complete teams. International Community School out of Winter Park placed first, as they put their top five runners in the first fifteen positions. The overall winner for the girls varsity race was junior Brooke DeMoor from International Community School. She finished the race in a swift time of 20:38.

The girls cross country team will travel to Austin Tindall Park in Kissimmee on Friday evening October 16th to participate in the JT Memorial Invitational.

For full results from the Wildwood Invitational visit the following link: