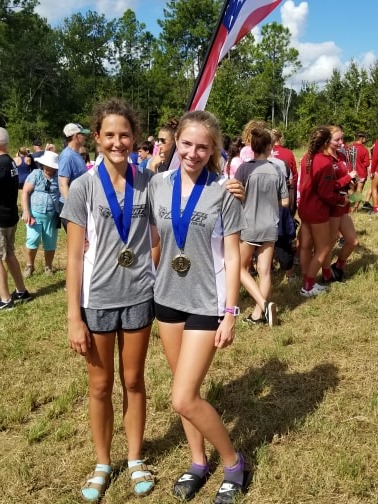 This morning the East Ridge High School girls cross country team competed in the Windermere High School Invitational at Lake Louisa State Park in Clermont. It had been two years since the Knights had competed at Lake Louisa. Lake Louisa was a beautiful setting to the morning’s race, as the course was on the equestrian trails of the state park. The temperature at the state park sat in the mid-70s, and the sun glared on runners for most of the morning. Girls from more than 33 different schools competed Saturday morning in the Windermere High School Invitational. Deviating from tradition, the boys race went off first. The boys were to begin at 8:00 AM, but the meet was delayed due to the high volume of spectator traffic. Therefore, the girls race went off at 8:50 AM, approximately 20 minutes later than the planned start time.

The field of runners for the varsity girls race was 244, and the narrow choke point from the starting area to the equestrian trail made for quite a scramble of elite girls trying to establish favorable positions. Senior Reagan Parks knew she needed to get a good position early, if she was to compete with the elite runners in the morning’s meet and attain her goal of a sub-20 minute 5K. She has been chasing a sub-20 minute 5K for four years, as it had evaded her time and again. So, Reagan hustled to head of the field, and found herself in fourth place through the first mile of the race. Reagan’s second mile had a two-fold goal of recovering, but keeping her positioning. Reagan was spotted in sixth place just past the two-mile mark. Recovered and with minimal positioning loss, Reagan dug in to improve her third mile pace. She knew her third mile pace needed to be closer to her first mile pace if she was going to give herself a shot at breaking the 20:00 mark. As she rounded the final turn and approached the finish line, the giant race clock caught Reagan’s attention. Undoubtedly, Reagan did some quick mathematics in her head. Her eyes widened and a grin formed on her face, as she made her final acceleration. Reagan placed seventh in a time of 19:56, and became the second girl in East Ridge High School’s history to break the 20-minute threshold. East Ridge’s fastest 5K on record for girls is 19:44, and it was set by Kelsey Arellano in 2006.

East Ridge had three girls compete in the junior varsity race on Saturday morning. Freshman Bre Peine placed fifth in a field of 146 female runners. Bre finished in a time of 24:09 – a new career personal best. Sophomore Peppa Marin finished in 58th place in a time of 29:43, and sophomore Mansi Patel finished in 63rd place in a time of 30:05.
As a team, the East Ridge girls came in seventh out of 33 scoring teams. Harmony High School took first place by placing their first three runners in the top ten. The individual champion was Ashley Klingenberg of Lake Brantley High School. Ashley finished in a swift time of 18:35.